Let us Honor the Fallen

This weekend while you are enjoying time with your family on this special holiday weekend, please take a moment and remember our fallen soldiers. Let us keep our troops, POWs and MIA in our hearts and prayers. Thank you Veterans!! May God Bless America!!

A Bit of History here.....
In 1868, Commander in Chief John A. Logan of the Grand Army of the Republic issued General Order Number 11 designating May 30 as a memorial day "for the purpose of strewing with flowers or otherwise decorating the graves of comrades who died in defense of their country during the late rebellion, and whose bodies now lie in almost every city, village, and hamlet churchyard in the land."

The first national celebration of the holiday took place May 30, 1868 at Arlington National Cemetery, where both Confederate and Union soldiers were buried. Originally known as Decoration Day, at the turn of the century it was designated as Memorial Day. In many American towns, the day is celebrated with a parade. Source - [Read More] 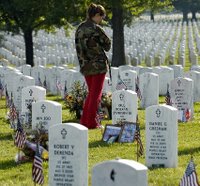 Defense Dept. photo by William D. Moss
Be sure to check out The Vietnam Veteran's Memorial Wall .
Blue Star Chronicles has an excellent post with many links that you will enjoy.
A tribute to all those who have given their lives defending freedom-Music Hymn and Video at Mike's America.
Terrific Tributes by Bushwack at American and Proud of it.
"Flags In" at MDConservative - Conservative Intelligence Report
Gayle at My Republican Blog posted Remembering .

posted by Assorted Babble by Suzie at 2:10 PM 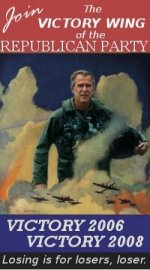